Some parts of Greece are not just travel destinations but real experiences that you are going to remember for a long time. Apart from the beautiful locations, picturesque villages, and crystal beaches, the gastronomy of each place is often the reason to return again. And Mani is one of the places that win your heart, especially with its great traditional food. Wherever you will be there, you will find shops in which you will enjoy the traditional tastes of Mani at any time of the year. Lallaya is definitely the recipe you shouldn’t miss.

A trip to Mani no matter what time of the year you will be there it will fascinate you. The difficult route in some places will reward you as soon as you see the destination. There you will see stone towers and silent villages that will enchant you. Byzantine monuments as well as tourist settlements that have not lost their traditional aspect. And that makes the journey exciting. A trip full of experiences and images that you will remember for a long time…

One of the places you should also visit if you are in the area is Gerolimenas. It is the limit after which the visitor’s path becomes more lonely. From Gerolimena you can also visit the nearby and beautiful Vathia which is 15 km away. The paved road follows the coastline on a beautiful route.

The traditional recipe for Lallaya

Lallaya is a traditional recipe that you should try if you are in Mani. If you taste them then, every time you will be in the area, you’ll be looking for them. But until you get there, you can try making them by yourself. We’ve found the traditional recipe for Lallaya.

First, put the flour in a bowl along with the oil and rub it with your palms to moisten it. You’d better do it several hours before cooking.

Then add the rest of the ingredients, stir, and slowly pour in the lukewarm water. Knead a dough medium softness, when you are doing that often oiling your hands. Cover the dough until it doubles itself. If you’ve used sourdough, it’s going to take longer to inflate. In the end, make thin and long laces and start to bake them by throwing them folded in four in a deep pan with hot oil, until they will be well browned. Take them out let them dry from the extra oil and store them for several days. They are wonderfully accompanied by cheese. 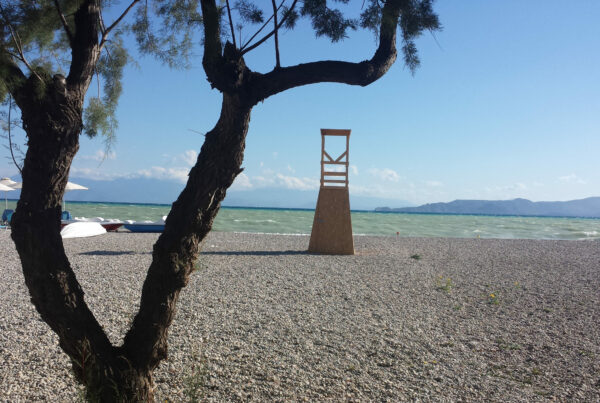 The beaches of the Corinthian Sea for great swimming experiences.