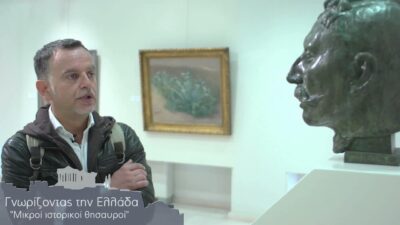 Exhibits show the influence of movements on Greek artists

A small historical treasure in Athens. The destination is the Municipal Gallery of Contemporary Art, in Avdi Square. In Metaxourgio district. From 1855 to 1875 the building at the intersection of Leonidou and Mylleros streets functioned as a silk factory. That’s how the area got its name.

In the two halls of the beautiful neoclassical building, the visitor will find the permanent and the periodic exhibitions. The exhibition features exhibits from the late 10th century onwards. The movements of Academicism, Impressionism, Expressionism and Fauvism are located on the walls of the building. We end up in 1930s works.

Through the paintings, we watch the influence of key movements of the beginning of the last century on Greek painting art. Important Greek painters are represented with their famous or lesser-known works. It is the evidence of intense imagination and creativity that remains alive. The characteristics of the artists of that time. A time when many movements sprang up that influenced the evolution of world art.

In the museum, we see the influence of movements on Greek artists. In the Municipal Gallery of Contemporary Art there is a rare work by Giannis Moralis. It’s one of the few exhibits about still life. This project was acquired by the Municipality of Athens in the last auction before the war.

A very interesting element of the report is the impact of technology, especially communications and travel. We are at the beginning of the 20th century. The first cars arrive in Greece. That’s when the railroad spreads. Travelling abroad is becoming easier. Not like today. Easier, though. Greek painters are increasingly in contact with their foreign colleagues. This can be “read” by someone in the tables. Their influences are more pronounced. More obvious.

Metaxourgio has several treasures. Some are obvious. Others are well-hidden. The Municipal Gallery of Contemporary Art belongs to the second category. Coming out of the museum, there are many options in the area. A hot cup of coffee or a traditional café for the rest of the day…