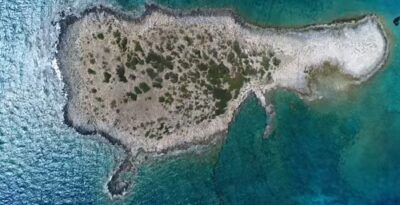 Laconia: Glaros, the island which is the the twin brother of Cyprus

A special corner of Greece from above

When you explore Greece from above, you discover many more beauties than you could have imagined. This is also the case with a Greek island that looks its shape, remarkably with Cyprus. It’s an island near to Laconia, which you probably didn’t know until now. Its name is Glaros(seagull) and the images are indeed impressive. It is, as they call it, the twin brother of Cyprus.

The Haanity channel of Youtube made a special flight over the island of Glaros in Laconia and gives us unique images of crystal clear turquoise waters. This Greek island that resembles Cyprus is located in the area of Marathia Laconia. And indeed, if you approach it by boat, you may not understand how it looks like, but from above it’s clear.

It is a unique place that looks incredibly like Cyprus. It is definitely one of the most beautiful and impressive remarkable in Greece. A special Greek island.

And it can be an island not known and without inhabitants but close to it there are well-known diamonds of Greece. Close to this unknown island are various well-known parts of Laconia, such as the exotic and beautiful Elafonissos. If you may have been on the beach of Marathias in the past, then you may have noticed this island. It is only 500 meters away from this beautiful and well-known beach. A sandy beach that gathers a lot of people during the summer months firstly because of the golden sand and secondly because of the crystal clear waters and its area.

That is where the so-called “Cyprus” of Laconia is located. A beautiful, small but also lonely Greek island that enchants you when you first see it from above.

The pictures speak for themselves. Watch the video from the Haanity channel…