Cyclades :Naxos – The rare and impressive Archeological Temple of the Goddess Demeter

By ilias Frag December 12, 2020 June 29th, 2021 No Comments
Cyclades :Naxos – The rare and impressive Archeological Temple of the Goddess Demeter

A historical gem of the island

A rare Archaeological Temple in a unique location. The archaeological temple of the Goddess Demeter. One of the many reasons to visit Naxos even in autumn. That’s when you’ll find nice seawater with a few people, villages that they are bak to their calm rhythm. Where you will taste authentic flavors in cafes and taverns by the sea. Naxos has so many reasons to visit it even for a weekend. Of course, its sights are one of them. 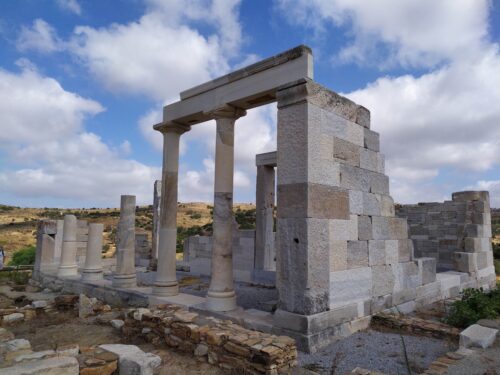 The Temple of the Goddess Demeter

The Archaeological Temple of the goddess Demeter is one of the most important ancient buildings in the history of Naxos. The sanctuary of Demeter together with the temple of Hera are considered architecturally the forerunners of the Parthenon.

It is built between 530 and 520 BC in white marble. The monument dominates the hill of a fertile plain overlooking both the sea and the mountain of Za (Zeus). Later, in the 6th century, the ancient sanctuary was formed into a Christian royal church.

In the surrounding area of the Archaeological Temple of the Goddess Demeter, you can visit a very special museum. It has been awarded for its architecture, as well as for the way it is harmonized with the rest of the landscape. More specifically, it was awarded on 4 June 2004 in Munich with the highest distinction of the European Union and Europa Nostra, in the category ‘1d: Archaeological sites’.

Inside the museum, you can observe archaeological finds that were not used in the restoration as well as various finds that indicate the importance of the site. 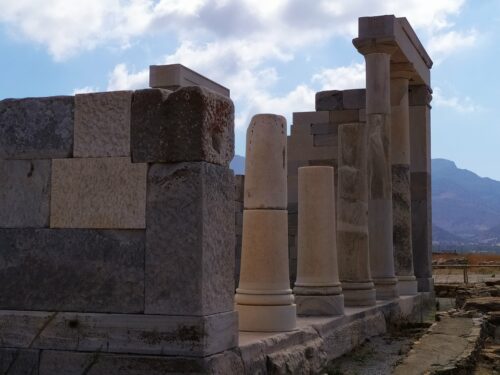 The museum and its two parts

In the first room, you can observe parts of the ρroof of the temple, as well as the section of the inner columns. The inner columns were used for the worship of the Goddess Demeter and her daughter as evidenced by the inscriptions found in the temple. Also of particular importance are the statues of the Kurds as well as the inscriptions from the sacrifices to the gods.

In the second hall is dedicated to the church, you will find the interior part of the early Christian church. Also parts of the pulpit and its characteristic marble window. Finally, you will notice lamps and matrices that were used in ceramic constructions.

Admission is free and accessibility for people with disabilities
exists only for the Museum Collection.