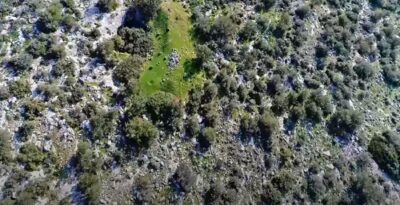 The cave of Attica where panthers once lived

The more we explore Attica and Greece in general, the more interesting and unknown information we learn about it. You knew, for example, that only 45 minutes away from Athens once lived a pack of panthers. And yet it is true, and indeed, signs and relics have been found of them. Where exactly is this place? It is in a dolin (in a crater – cave) in Vravona, Attica. It may be a place unknown but it really has great interest.

The cave of Attica where panthers once lived

45 minutes from the center of Athens once lived a pack of panthers. This fallen cave in Vravona, Attica (the dolin) is a place of special aesthetics that impresses you especially when you see it from above. Besides, only from above can you admire it since there is no path to get there. This particular location used to be a place where panthers lived and in which they even dragged their prey to… eat.

As reported by research by the Ministry of Culture, this particular dolin of Vravona is a cave in the shape of a basin that actually has a precipitated roof. It can be located only 2.5 km away from the archaeological site of Vravona.

It has a circular shape and is full of clay sediment which is rich in paleontological findings. The paleontological significance of the Vravonas dolin became known very recently. Specifically, it happened somewhere in the early 1970s. From then on, excavations by the Department of Geology of the University of Athens were carried out in collaboration with the Natural History Museum and the University of Vienna.

According to the researches, it was revealed that there was a fossilized osteological and dental material of small and large mammals. Characteristic is that most of this material belonged to panthers. Other species found are wolves, bison, lions, horses, bears, foxes, and wildcats.

It is estimated that these species lived there about 8-25 thousand years ago.

The images provided by the Haanity channel of youtube from above are impressive.