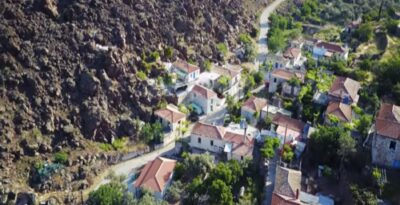 Exploring wonderful Greece, you can see how many beauties you may encounter and how many places with a rich history there are that you do not know. Small or large villages that have their own secrets and their own strange story. One such village is the Kameni Chora (burned town) in Methana. A small Greek village built on lava. There, in the Volcano of Methana. The images from above are impressive and you know you won’t meet them anywhere else in Greece. It is worth being there, 2.5 hours away from Athens. The result will reward you.

This special Greek village is a small corner of Greece that counts about 15 inhabitants. If you find yourself there you will find that it is indeed a very special village. The rocks that exist in this Greek village in Kammeni are deep black. Around you can see fertile land with large pines. Even when you look at the Kameni Chora from the satellite, you see that it offers you a unique image that you can not describe in words.

Among olive groves are built houses, in lava or even from lava. It is a settlement that measures thousands of years of life and coexists perfectly harmoniously with a volcano at its foot. Extremely impressive and strange is the fact that the caves in Kameni Chora are used as refrigerators because of their temperature.

There is, however, not much and accurate information on when exactly the village of Kameni Chora was created. As Pausanias mentions in “Trizinia”, there was a volcano eruption and the appearance of hot springs for the first time in the early 3rd century. B.C. Regarding, the last eruption of the crater, located in Kameni Chora. at a height of 417 m, is considered to have occurred in 276 BC.

How to get to Kameni Chora

Access to this village is not particularly easy but it is definitely worth it. You can see HERE exactly where it is and plan a trip to this special part of Greece at some point. How many times do you get the chance to go to a village made of lava?