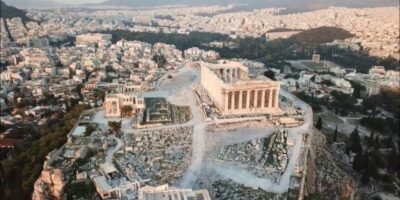 Attica has such a rich history that it surprises you every time you discover it. Facts, stories, myths, and legends follow its various regions. They are also followed by various names. Many of the regions of Attica are now named completely different than 30 years ago, for example. This is also the case with two areas of Attica which have strange names but few know who they really are. The reason for Hezolitharo and Mounicha. Do you know which areas we’re headed to?

Hezolitharo in the center of Athens

The area that the old one was never called Hezolitharo was part of today’s Metaxourgio. It is essentially a section between Metaxourgio and Botanikos. But how did that name come about? It was when the Dourotis brothers founded the first silk operations in the area. After the marriage of Athanasios Dourotis with the daughter of Michael Iatrou, they created the company “Seric Society of Greece A. G. Douroutis and Co”. They then bought the bankrupt English silk factory.

Metaxourgio was born with the general manager Athanasios Douroutis who even lived in the factory. The titles of ownership of the factory of the Dourotis family alternately mentioned the place names “Chrismeno lithari (Anointed stone)”, “Grysolitharo” and “Hezolitharo”. So it stayed to call it by that name. Meanwhile, around the factory, an entire area was formed under the name “Hezolitharo” which today is called Metaxourgio.

What is the Mounichia of Attica In the same way, another region of Attica, the so-called Mounichia, has now changed its name. The reason for Mikrolimano that was once (in antiquity), then, was called the port of Mounichias as well as the wider area. How did that name come about? According to Euripides (ancient poet) in Hippolytos, the original founder of the area was the mythical hero “Mounychos” who settled in the area with their followers “Minyes”. However, gradually and over the years, other historical events took place and eventually remained the name Microlimano.

With information from the book: Neighbourhoods of old Athens. The Metaxourgio. Kolonos- Plato Academy, by Costas Hatziotis, publications of the Municipality of Athens, Athenian Library