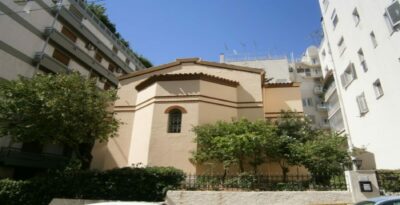 Athens: The church that has had Count Ypsilantis’ heart for 160 years

A secret that few know, even though they often pass outside of it.

Just a few meters from Syntagma Square, in the center of Athens, is a well-hidden secret. For 160 years. It is the place where the heart of Alexander Ypsilantis rests. Few know it is embalmed in Athens. It is kept in the chapel of the Pammegistoi Taxiarches at 6 Stisihorou Street behind the Presidential Mansion. Along with his brother’s heart, it is there as a reminder of the eminent history of one of the pioneers of the Greek Revolution of 1821.

The Church of Pammegistoi Taxiarches

Although most people go down to the center of Athens and Kolonaki Square, few know the church of Pammegtoi Taxiarches well. And even fewer people know that there is where the embalmed heart of Alexander Ypsilantis is. Few visit the chapel for this reason. Although the church has been built in Athens since 1857.

Where the heart of Alexander Ypsilantis is kept

In the Temple of the Pammegistoi Taxiarches, the stuffed hearts of Alexander and Dimitrios Ypsilantis have since been kept as a National Relic in silver and gilded cyths. But how did that happen? It was Princess Mary, wife of George Ypsilantis who made sure that the two hearts were placed there and guarded, without sharing the secret. It was the last wish of Prince Alexander Ypsilantis, Head of the Greek Revolution. He was imprisoned by the Austrians at The Bugats Tower and died in Vienna in 1828. His desire was his heart to be embalmed and buried in Greece. His last wish came to pass by his brother George, who brought it and it was kept at the first in the Holy Temple of Agia Irini in the year of 1832.

In 1854, a major cholera epidemic spread to Attica mostly to Athens. Then Maria Ypsiladis, George’s wife together with queen Amalia (Otto’s wife who was the first king of free Greece), pioneered the construction of an orphanage for the orphans of the epidemic. The boarding school was eventually built on the confluence of Lyceum and Stisihoros streets named after the queen. Next to it was the small church of the Taxiarches, to which the heart of Alexander Ypsilantis was transferred and later on, the heart of his brother Georgios.

Let us say, here, that while this is not in accordance with the rules of the Orthodox Church, the tendency of embalming was adopted for several fighters of the revolution of 1821, mainly because of the presence of the Bavarian element in the country. Embalming of the hearts of important persons was particularly prevalent in 19th century Europe.

Next time you come to Athens, you have a reason to get to know this church a little better…